If this is your first visit, you may want to subscribe to my newsletter. 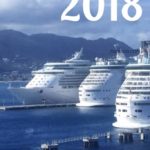 Cruising an ocean liner is generally a great experience no matter the age of the ship. Some people even prefer older ships because they like the layout and features better. But just like a new car, it’s exciting to cruise on a new ship. You won’t be short on choices as several major cruise lines have scheduled maiden voyages for their new ships in 2018. Let’s talk about it!

Royal Caribbean’s Symphony of the Seas

Symphony of the Seas is set to hit a new record as the largest cruise ship in the world at 230,000 tons.   Symphony will be part of Royal Caribbean’s Oasis Class but won’t be an exact copy of her sister ships.  What’s new? A two-deck-high family suite with a slide between floors, a New England-style seafood restaurant, a new candy and ice cream shop, and a new casual Mexican eatery.

After spending its first summer sailing the Mediterranean, the Symphony will home-port in Miami offering alternating 7-night Eastern and Western Caribbean cruises.

The Horizon is the sister ship to the Carnival Vista which debuted in 2016 to rave reviews. The Horizon will have a lot in common with the Vista like the IMAX Theater and Sky Ride. New for the Horizon will be the Pig & Anchor Bar-B-Que Smokehouse|Brewhouse, another Guy Fieri partnership. It’s a brewpub that’ll serve smoked-on-board barbecue and house-made craft beer. A Teppanyaki restaurant will also make its debut on the Horizon.

The Norwegian Bliss will be ranked as one of the 10 largest ships in the world boasting a two-deck-high racing course with electric go-carts. Like her sister ships Joy and Escape, Bliss will have multi-story water slides, a restaurant-lined boardwalk, and Tony Award-winning production shows. New dining options added to the Bliss are a Texas barbecue eatery called Q and a full-service Starbucks store.

Bliss will spend its summers sailing to Alaska from Seattle and winters sailing the Eastern Caribbean from Miami.

Created by noted hospitality designer Adam Tihany, the Ovation might be the most luxurious cruise ship of the year.  While featuring many of the elegant, contemporary spaces also featured on her sister ships, she’ll be a larger version of the three Odyssey Class ships.  Ovation will have one extra deck and expanded public areas which makes her about 26% larger and holds 33% more passengers.

Ovation will spend the summer and fall of 2018 in the Mediterranean and Northern Europe before moving to Asia for the winter.

VIDEO: A Preview of Seabourn Ovation

The Seaview is the sister ship to the recent MSC Seaside, which just began sailing a few months ago.  Like the Seaside, Seaview was designed to offer passengers more interaction with the sea: extra-wide promenades that jut over the side of the ship, outdoor eating areas, outdoor gym, and floor-to-ceiling glass windows in interior public areas.  Also on board is an Aqua Park with four waterslides, a ropes course, and zip lines on the top deck.

The Seaview will cruise the Western Mediterranean out of Barcelona, Spain and Civitavecchia, Italy.

Viking Cruises is mostly known for river cruising, but it’s expanding its operations into ocean cruise liners with the Viking Orion.  It won’t be as large as the Symphony or Bliss but big has never been Viking’s thing.  Itineraries on Orion will have more time in ports and you’ll get shore excursions that are included in the price.  Also included will be beer and wine with lunch and dinner and WiFi access.  Like its other ocean siblings, cabins on Orion will be larger than the average cruise ship cabin with its smallest cabin coming in at 270 sq. ft.

Orion will sail a variety of itineraries ranging from 7- to 92-nights that include the Mediterranean, Asia, Australia, New Zealand and Alaska.

Nieuw Statendam will be similar in structure to its sister ship Koningsdam but feature new public spaces and its own style. At the center of the ship is a three-deck-high atrium whose ceiling is a high-definition projector which subtly changes. It could be clouds floating in a crisp blue sky or a reflection of the evening stars above. The seafood eatery Sel de Mer will be on board along with an entertainment zone called Music Walk. The ship will have family cabins that offer room for 5 with 2 bathrooms as well as solo cabins.

After its transatlantic voyage from Italy, Nieuw Statendam will sail to the Caribbean out of Fort Lauderdale.

The Edge is Celebrity’s first new ship in six years. She boasts a ton of new and innovative features like it’s Magic Carpet, a 90-ton platform the size of a tennis court that will move up and down the side of the ship. It will be multipurpose, it can serve as the tender boarding platform or a 90-seat alternative dining area depending on which deck it’s on. Edge will also have a jogging track that spans two decks, a Rooftop Garden relaxation area, poolside cabanas with 20-foot ceilings and hot tubs on stems mimicking a martini glass. The cabins are innovative too with the introduction of Infinite Veranda cabins designed to blend the indoor and outdoor experience. Bi-fold doors in the rooms can either be closed completely like a traditional balcony cabin or left open, creating a wide-open indoor space that’s about 23% larger than traditional balcony cabins. ? Edge will also include Celebrity’s first solo cabins.

The Edge will start out sailing the Caribbean out of Fort Lauderdale before moving to the Mediterranean for the summer of 2019.

Do any of these ships catch your fancy? Me? I plan to try them all! Would I be Your Cruise Girl if I didn’t? ?

Which ship are you dying to board?

My next cruise is in…

We always plan for delays and try not to get frust

This Strawberry Frozen Yogurt is one of my favorit

TIP: Set your lights on timers so that it appears

“We take photos as a return ticket to a moment o

Monday was the big brother’s birthday. He’s a

TIP: Preprint labels if you plan to mail postcards

We are a participant in the Amazon Services LLC Associates Program, an affiliate advertising program designed to provide a means for us to earn fees by linking to Amazon.com and affiliated sites.